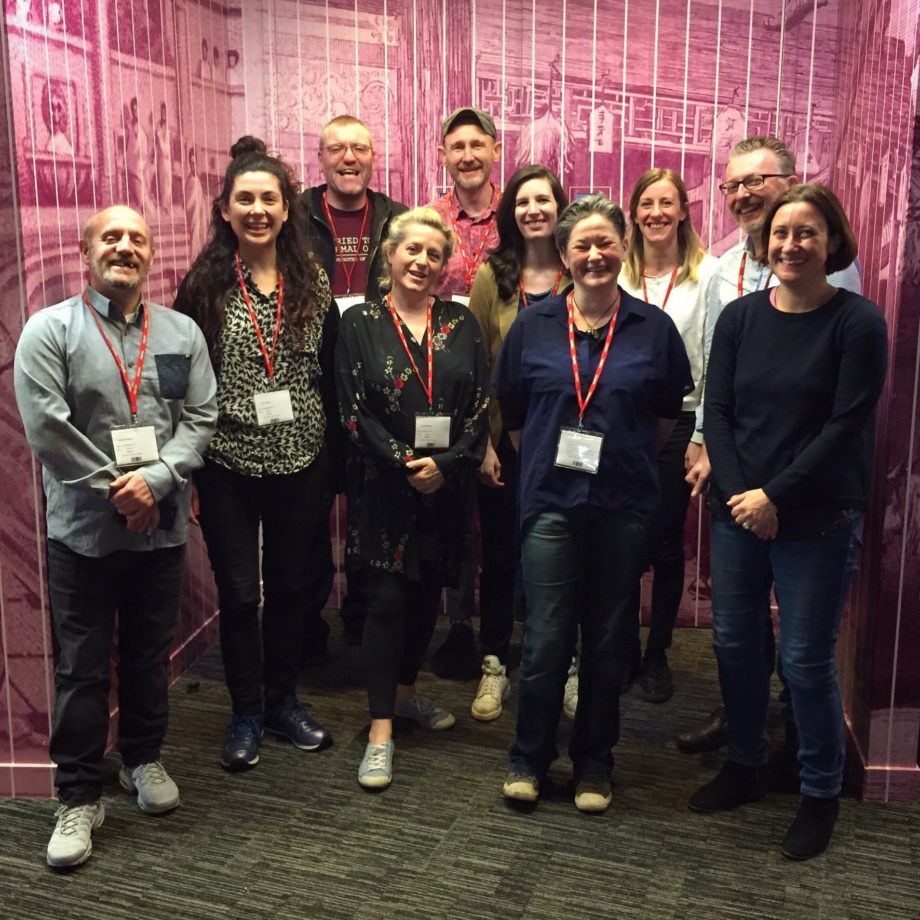 With One Voice, the international arts and homelessness movement, founded by Streetwise Opera, became an independent organisation in April with 50% of the board and staff made up of people who are or have been homeless. Director Matt Peacock and Creative Producer David Tovey co-create a blog about the importance of co-creation.

David: I’m from a working-class background, joined the Army at 16, became a chef and a business owner. At the age of 36 I lost it all after a stroke, this led to a multitude of illnesses including HIV, alcoholism, depression, attempted suicide and a complete breakdown. Lost my home and moved into my car. I became homeless.

This was back in 2013, since then I’ve become an artist and founded the One Festival of Homeless Arts.

The festival was conceived after an event put on by With One Voice at City hall. After listening to a Brazilian delegate talk about a music festival created by homeless buskers in São Paolo, I was like, ‘Why is this not happening in London?’

This is when I met Matt Peacock.

Never did I guess 4 years later I would be offered a job with him over lunch that we’re co-creating together.

Why do you think it’s vital that the organisation is co-created?

Matt: In my view, it is the only ethical way of running a social justice organisation. As a sector, we have moved from access (come to see ‘our’ arts) to participation (get involved in ‘our’ art) to integration (in decision-making) and the final step is true equity. We are probably at the integration stage and are challenging ourselves to move to equity. Plus co-creating makes every decision richer and better.

David:  With identity an important factor in our diverse world, we need to give over power and control to that specific identity group that we are programming with. Creating 50/50 learning and education from the start, thus understanding the equity needed to sustain and promote a stronger credibility and trust from all groups ‘Nothing about us without us’.

Co-produced programming feeds into those spaces, creating ownership. By adopting this working method, you open many more opportunities from within an identity group that you are ultimately striving to raise awareness of.

How did you do this?

Matt: We were inspired by co-creation models in Brazil and UK: The Movimento Populaҫao da Rua (the movement of the streets) and the Manchester Homelessness Charter. Having worked with both bodies we developed our co-creation model at WOV with five key principles – learning from each other, ‘just do it’, communicate, be flexible and implement a support structure.

We carried out a light-touch skills audit to identify the kinds experience we were looking for and then approached people directly to sound them out. We believe in fitting a job around the individual’s experience and interests instead of imposing roles – organisations learn more if they listen to and learn from the staff. Also the best way to learn how to do a job is to do it – the majority of roles in any organisation are experience-based supplemented, if needed, by training.

Communication is key particularly around expectations so that staff feel they can be honest. Provision must be made for personal situations to take priority – if someone needs to take days, weeks or even a few months off, that should be made possible. And finally, we have all felt it important to have a solid support structure in place – an independent support worker who can provide chats, a cup of tea and be a sounding board for everyone.

What challenges have you faced along the way and what further challenges do you envisage in the future?

David:  My work has predominantly been raising awareness of homelessness and other social issues that I live with. Some of these issues have caused me disabilities. Physically, mentally and societally. Lately my artwork has started to be recognised by the cultural sector. This isn’t the case for most artists who are or have been homeless. They’re hindered before they’ve even walked through the doors, having been judged because of the lifelong preconceptions associated with the homeless community. This preconception is the first of many challenges we must overcome, and it needs to be fully adopted throughout the sector.

We may also encounter people or organisations unwilling to change because of the size of organisations or the difficultly in shifting the status quo. This is widespread across the sector. In the UK thou I feel there is a sea change.

Matt: The Benefits System is a double-edged sword. Of course, it is better to have one than not but our current system is too complex and does not allow for transitions back into employment effectively. Fear and anxiety leads many people I know to turn down part-time work because they are, understandably, scared they will lose their benefits or not be able to get back onto benefits once the job is over. The system also has a poor understanding of mental health issues and their notion of when someone is ready-for-work does not match how people feel.

What benefits of working in this way have been reaped already?

Matt: One of the most significant impacts we have found is when we started to build a new homelessness support visual model with Manchester Homelessness Charter. Historically, homelessness support structures have been created by policy-makers according to a Maslovian model with food and shelter coming first, then housing, education and finally ‘positive activities’ such as arts and sports. When we co-created a new model, people who are or have been homeless said that they need all interventions at the same time. They said that when experiencing the trauma of homelessness, the arts is vital in making you feel connected to others, to express yourself, to manage mental health. This became the Jigsaw of Homeless Support – it is now the model used in the Charter and the Manchester Homelessness Strategy and is likely to be implemented next into Tokyo.

David: For years now I’ve seen decision-making in the housing sector which has been top-down and guess what? It’s not been working. The past year I was a commissioner for Shelter alongside 15 other commissioners, such as Rt Hon Ed Miliband and Dame Sayeeda Warsi. We co-produced a commissioned report that we all agreed on, even though coming from across the political spectrum and a diverse range of backgrounds. This report is being used by Shelter to petition the Government for change.

This is just one example of the many benefits of adopting co-produced programming from the offset.

Find out more about With One Voice at http://with-one-voice.com/.