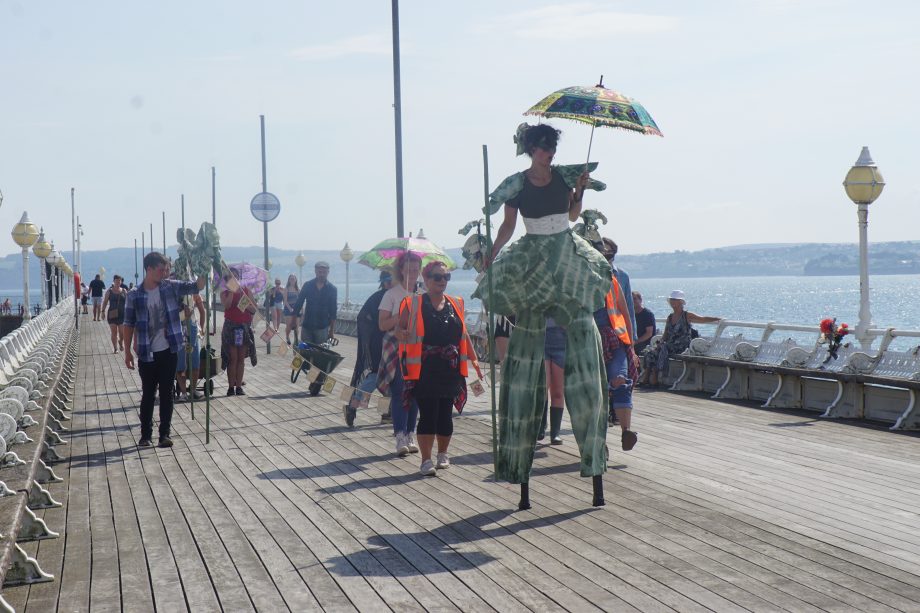 At Doorstep Arts we view each individual as an artist – whether that is a four-year-old child or a twenty-year-old who isn’t sure if Higher Educations is for them. We live and breathe co-creation and try to honour each and every person’s ideas.

In February 2020, we received funding from the Heritage Lottery Fund to co-devise an original piece of theatre exploring the history of protest and rebellion in Torbay. The project involved an ensemble of 14 – 20 year olds, many of whom were involved from the very beginning of the process and helped to shape our initial funding bid. The young people quickly started cooking up ideas based on articles and images from the history of Torbay. We also took a trip to Battersea Arts Centre to watch When It Breaks It Burns by coletivA ocupação’s for inspiration.

With fire in our bellies from our recent trip we were all set to start creating our original show. Then Covid-19 struck and the country was plunged into lockdown. We were forced to cancel all sessions and stop meeting in person, but we were determined to move forwards with the project and promptly shifted our work online.

As part of the project a small group of young people met with Torbay Heritage and Social History specialist Dr Kevin Dixon. Ideas soon started to form, and we became obsessed with learning more about Paignton’s past, particularly the missing pieces of the town’s history. We were also assisted by Tom Pearce, a history student from the University of Exeter who joined us for an internship during the summer.

In the 1800s Paignton was renowned for its delectable Pole Cabbage – distributed from the harbour and sailed around the world. Who were the cabbage growers and how did they react to the land being sold from under their feet from rich businessmen who had other ideas? How did they feel about the railways and the town’s embrace of tourism?

Amy Mellows, who had been helping the young people to create podcasts during the lockdown, worked with long standing Doorstep member Mia to make an episode about Black Lives Matter, interviewing people from South Devon Anti-Racism Alliance and highlighting the challenges that some of the young people have faced.

Each week we could see the challenges and difficulties these young people were facing during the lockdown. We were noticing each week the decline in positivity on the Zoom meetings. Some young people skipped the sessions and we could see sad faces on the screen. The participants were missing one another and feeling lonely, as were many isolated older people in the community. With this in mind we decided to start a cabbage adoption scheme, with young people delivering cabbage seedlings to people’s doorsteps.

Lockdown was taking its toll on all of us. Those with children at home now had to educate them as well as working – attending Zoom meetings while four-year-olds climbed on top of our heads and teenagers swore and shouted in the background. With Public Health Guidance starting to loosen, we jumped on the chance to meet in small, physically distanced, outdoor groups in person for musical sessions which we called Cabbage Jams.

During these sessions we made huge progress with the project, not only in our devising and idea generation, but also in combatting the sadness we had been feeling due to the lockdown. There was lots of laughter and we were able offer support to those who needed it. These sessions were a lifeline, not only for the young people, but for everyone involved.

As the summer progressed the creative ideas were gaining momentum. Unable to rehearse and perform a show as originally planned, we decided to organise a series of parades. A design team led by the incredible theatre designer Fi Russell was established to create props for the processions and musicians from the group attended sessions at a local recording studio, working with Emily Howard and Barney Dine to record their original songs.

From August 11th – 13th we took to the streets for a series of physically distanced processions – visiting Brixham, Paignton and Torbay. These colourful parades were made all the more spectacular by the inclusion of stilt walker Sadie and a unicycle riding, cabbage juggling jester – Rupert. Together we danced, played our songs and handed out packets of cabbage seeds to passers-by.

To watch a video of the Cabbage Rebellion processions, listen to our podcasts and find out more about the project please visit: www.cabbagerebellion.co.uk

Following the parades in August, we have continued to work on the protest and rebellion project and plans are currently in place to create a film version of the group’s original script. For all the latest updates please visit our social media pages or subscribe to our newsletter.