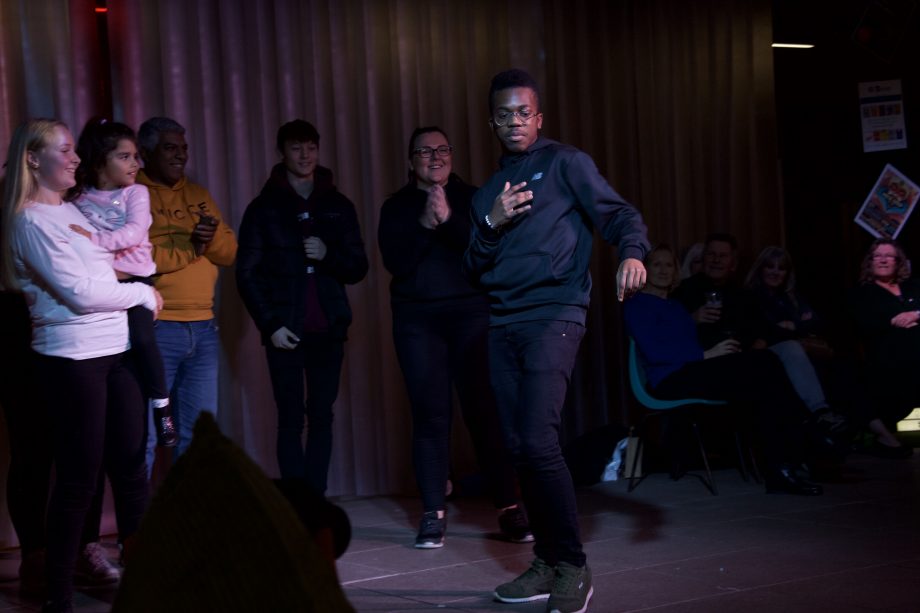 National Theatre Wales (NTW)  has been making English-language productions in locations all over Wales, the UK, internationally and online since March 2010. It operates from a small base in Cardiff’s city centre, but works all over the country and beyond, using Wales’ rich and diverse landscape, its towns, cities and villages, its incredible stories and rich talent as its inspiration.

NTW TEAM is its model of engagement supporting a local, national and international network to act as a catalyst for change in the arts.

In 2018 NTW TEAM embarked on a four year project not knowing what the end product will be.

Taking our inspiration from the communities we were working with, co-creation, questions around power, and asking the constant question of ‘what is the role of theatre in today’s world?’ we began a project based around empowerment, leadership, connection and change in two very different areas of Wales – Pembrokeshire and Wrexham. 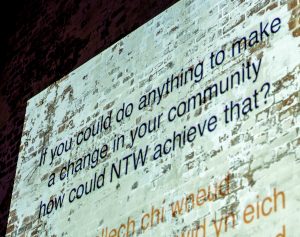 The finale will be an NTW production but its essence and everything that it will be will be chosen, developed and realised in collaboration with the people from those areas.

One year into the project the two themes that were chosen by the communities were climate change and the environment in Pembrokeshire and homelessness in Wrexham. Two subjects which have a resonance both locally and internationally.

The starting point for TEAM has always been about our ethos and values. To us it’s about how you approach things as much as what you do. At the centre of this is trust and an understanding that NTW aren’t the ‘experts’. Communities are best placed to make the decisions which affect them and there is, and has always been, a range of arts and cultural activity across Wales, and we want to contribute and build on this. It also means stepping back when the time isn’t right.

Setting out not knowing what an end product might be requires a huge amount of trust on both sides. Communities need to trust that NTW will deliver on what it promises and that it will provide a framework and mechanism where support is provided, voices can be heard and suggestions put into action. NTW needs to trust the decisions and suggestions made by people outside of its usual decision making processes and thus give up some of its power. This is a very different way of making theatre. It requires a whole new approach and some major shifts internally if it is to go past general ‘consultation’.

This focus on ethos and trust has become more important since the pandemic. Our role as a theatre has changed and we know that we need to work closer with people in communities even more now.

Our relationship with both these areas started well before the beginning of this project. We have staff members who live in these areas and they are supported by members of our TEAM Panel (15 people from across Wales who support and feed into every part of the organisation). They’ve been instrumental in curating our programme of work which, so far, has included training, placements, social and networking events, work with schools and prisons, film events, poetry sessions and open mic nights (you can see more info here). Each has been an opportunity to get to know people better, and to encourage them to help shape not only what the finale might look like but also NTW as a whole.

Because of this local approach, despite being a national organisation, when the pandemic came we felt we were in a relatively lucky position to continue working in both areas. Things changed, we’ve had to postpone both our productions, but we still had our network who could continue to advise us around our work and perhaps more crucially, still give us a presence in and feedback from communities. Beyond Covid, we also wanted our approach to reflect Black Lives Matter and #weshallnotberemoved.

For our show in Pembrokeshire, Go Tell The Bees, our co-creators (five creatives who are working on the production) developed an online procession in Pembrokeshire which worked in partnership with choirs, dance groups and schools that engaged over 700 people. With our partners, Counterpoints , who work in the field of arts, migrations and cultural change, we have developed a series of ‘Simple Acts’ which encourage people to interact with their environment and each other. We have even released a bilingual charity single with Carys Eleri, which is raising funds for an environmental charity, which you can find here. At the moment we are recording a series of podcasts around The Sea Empress disaster to commemorate its 25th anniversary. 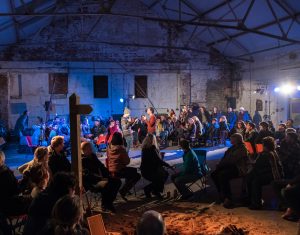 Digital work often isn’t the best answer when working around homelessness but we have run training sessions and are developing a network of creatives who have an interest in working with the homeless. In a more practical sense we’ve supported a local cafe in distributing meals to the homeless and ran a project which encouraged people to write poems and send letters and art to the homeless. We’ve kept in touch with many of the homeless people who have taken part in our activities pre pandemic and we are hoping to work in partnership with the Council to provide support for those in temporary accommodation in the near future.

Our hope is to hold our productions in 2021 (Pembrokeshire) and 2022 (Wrexham) and we’re keen that they’ll still be a celebration of both of the areas. In many ways co-creation has been an advantage. It has allowed us to respond quickly to a situation and because we weren’t set on a final outcome we can create something which reflects a very different world that we were in at the start of the project.

NTW TEAM has been funded by The Paul Hamlyn Foundation since its inception.