Sally Proctor, Slung Low’s Community Director, tells the story of their first year at The Holbeck where co-creation has saved an important community resource.

The Holbeck Working Men’s Club has been at the heart of the Holbeck community for over a century. It is the oldest social club in Britain. Formed in 1871, it was born as a place for educational opportunity and self-growth as well as for coming together to socialise and celebrate. It was part of the northern entertainment circuit – Ernie Wise played here, it’s got a Blue Plaque above the door and holds rooms full of stories that the walls keep secret. It’s no longer called a working men’s club for obvious reasons but it is still a member’s club, owned and sustained by its members. Slung Low have used and loved The Holbeck for some years. Staging performances here, joining neighbourhood network meetings, becoming members, watching the football here after the local gala during the world cup and enjoying all that the club has to offer.

When The Holbeck fell into financial difficulty a few years ago, some brilliant volunteers stepped forward to save the club. They worked tirelessly to try and pay off the debt and keep the club open. For nearly five years a small core group of volunteers kept the club running but it was by no means easy and the debt remained significant. We realised that there was a great opportunity for both organisations here and put forward a proposal to The Holbeck Management Committee. Our proposal was to pay off the debt to the brewery, pay rent each year to secure sole occupancy and manage the bar for the club. In doing this we also promised to protect and maintain the current opening hours, member privileges and the activities in the main bar areas which include the lounge and snooker room. The committee voted to accept our proposal. With a commitment to guarantee the club each year against loss we planned for it to become a thriving business. A space not only to be seen as a pub but also as an arts centre. A place that stays open and relevant and welcoming in the heart of an area that has clear need for it. There are very few amenities in Holbeck, something that community members always talk about. Most of the pubs have been closed down or are only open for Leeds United Home games.

In January 2019 we made the move. We put a call out for help and held a barn day inviting members of the community, people we had worked with, friends, anyone and everyone to come and get the club ready for our move. We spent a further month working hard to get the place in shape; we had asbestos removed, re-plastered, decorated and created a family room. We put in a new but modest lighting system and built a thrust stage extending the existing one out into the middle of the auditorium and we set about learning how to run a pub. In the beginning we were pretty bad at it, but we are used to learning new things and know that the key is to keep at it. And we did, and now some twelve months later we aren’t half bad at serving a drink, maintaining our stock or doing a line clean.

Running a pub is only one part of managing The Holbeck. It was clear when we moved here that some things needed to change. Things that we all needed to be in agreement about such as people working behind the bar being properly trained and doing so for the real living wage as opposed to volunteering. Many of the people volunteering in the past welcomed the chance to stand down from the bar work and a few elected to continue working behind as a waged role instead.

During the first four weeks of being in the Holbeck we said yes to every practical request from our members: outside tap, new glass washing machine, re-varnish the bar, put in a vertical allotment and we decided to continue saying yes to as much as possible. By being Arts Council England funded and through access to hosting a range of performance and workshop activities we are able to hold The Holbeck as a community space for people to use rather than a bar that needs to make money. Given the current political climate and difficulty facing many local pubs and social clubs making a profit simply wouldn’t be possible anyway. This means that the space is there for anyone who has need of it. There is a simple form to fill out should anyone wish to book a room and a few basic guidelines to follow that are mostly to comply with our licensing agreement such as not bringing your own booze.

Since moving in to The Holbeck the space has been used for a variety of community groups such as: Healthy Holidays who provide daily activities and a hot meal for children who might not get one otherwise during school holidays; a kids club; a young care leavers group; a project aiming to end isolation for young women by connecting them with people working in local industry; a couple of Ghanaian funerals; fundraisers for Simon on The Streets and other local charities; wedding dance rehearsals; an LGBTQ+ safe space cabaret night; a first holy communion …… the list goes on. All this and a termly scheme of Cultural Community College courses, a weekly programme of theatre that wouldn’t be seen elsewhere in Leeds and all of the regular club activities too including film nights and Bingo afternoons. It’s very rare that you’d visit the Holbeck to find nothing happening. 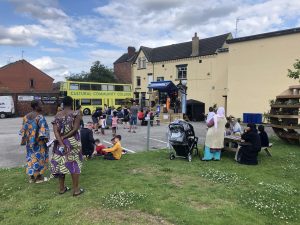 Moving to the heart of Holbeck from an area only five minutes down the road but directly in between the managed approach and a gentrified part of the ward has made an enormous difference to our ability to engage with the community. As soon as you walk into The Holbeck you will pass our offices and more often than not people will pop in to chat or to tell us what they need and we will always endeavour to help if we can. We are able to be responsive to community groups that are already in existence but need a space or advice. Sometimes, we’re just here for people who need to escape a difficult situation who have nowhere else to go because of the limited community assets in Holbeck. We find that this runs two ways as people contact us to offer to teach a class at our college, donate plants or drop off free sanitary products for us to leave in our loos in an attempt to support the movement to end period poverty. All of the events we run are you Pay What You Decide after the event and there is always tea and coffee available.

It hasn’t all been easy. But that’s not surprising is it? Clearly this sort of collaboration will bring about challenges, it’s a little like a house share and we all know the issues that can arise there. Most members were positive about our arrival although some of the club members were initially concerned that we were there to take over. One member reflected that it was like handing it over, but it was handing it over for the right reasons. Our approach to any understandable concern about our move is the same as it was a decade ago when we moved into the HUB: to turn up and to keep turning up. And to hoover. A lot. We stand by our promises and live up to them and eventually people’s perceptions change.

We had to tackle big issues when we moved to the club, the finances were in a dire state and there were stock takes that were significantly down. In these circumstances, although it was in close discussion with the members, we had to actively manage the club in order to keep it afloat. The Holbeck is member owned and always will be whilst we’re here, with regular committee meetings we are as open and transparent about what we do as possible. Owned and sustained by its members this club, like any co-operative, is a demonstration of the good that collective, mutually supportive activity can achieve. Anyone can become a member; it costs £6 a year to join and £5 to renew. Members are entitled to cheaper drinks, early notification of events, voting rights in members’ meetings but also will gain the knowledge that they are a supporter and member of the oldest club in the country. We have made a commitment to be here until 2023, we’re one year in and we have learned an awful lot, not least how to pull a good pint!
Further Reading

Slung Low’s Artistic Director, Alan Lane has a blog where he detailed the build-up to the move, placed a call for help with the move, described life at The Holbeck a few weeks in and then again after a year. Please find the links below:
The Times They Are A ‘changing. The story of The Holbeck, a social club
We need a little help
Standing in the rain
The cost of doing business – a year at the Holbeck

Brett Chapman made a short documentary film during our move and arrival at the Holbeck which can be accessed here: Standing In The Rain
The film was screened as part of Leeds International Film Festival 2019 to great acclaim and premiered at the club to members to quiet satisfaction.