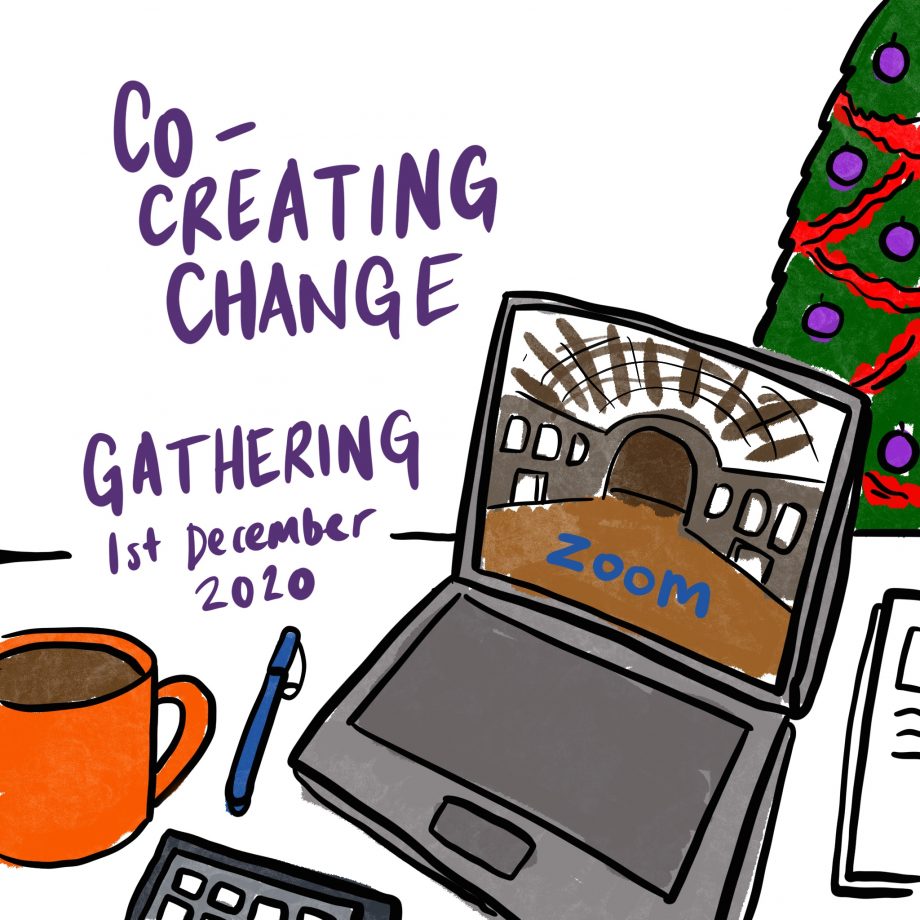 On a frosty but sunny December morning sitting in our dining room and home office, we joined a zoom meeting at 9am in preparation for the on line gathering of the Co-Creating Change network. In the ‘old days’, we would have been staying in a Travelodge in Battersea overnight. Instead, Susanne had walked the dog, eaten breakfast in her garden and Tamsin had done the school run. We were ready to join the discussion for the next 8 hours. Now, don’t get us wrong, we miss being with people in real space and time but there are advantages to this new world we are in and we were eventually joined by c.70 people from across the country.

Hilary Jennnings, who had worked with the CCC team to produce and curate the multi-platform event with Improbable had designed it to be as close to being together as it possibly could be,  introduced it urging us to imagine we were really in the Grand Hall at BAC where “futures have been imagined” and where the signs of the fire are still evident on the ceiling. It was a lovely device to remind us that the real world still exists and we will return to it at some stage. The technology allowed us to move around the various rooms at BAC through a well paced and constructed programme in large groups, small breakout groups and larger workshops. We were guided throughout by Jeremy’s clear explanations and the way Hilary held the space for us all.

After brief and clear introductions we checked in with others which involved chatting with a few other people about what got us through and what made us proud. There was commonality and resonance here as some people talked about being furloughed whilst others who were self-employed had lost all work back in March and found it terrifying. People talked about how siblings, families and pets had seen us through, about how important it had been to learn that they were not just their work – they were a person beyond that – and about how important it had been to press the pause button on the pace of their pre-covid life. People talked about how they had reinvented their work and found new ways of generating income, how they had contributed to the community, home schooled, connected to neighbours and learned new skills. What was fascinating was the ease and openness with which we all talked – we were in our own homes and this felt somehow more intimate than being in a neutral space. 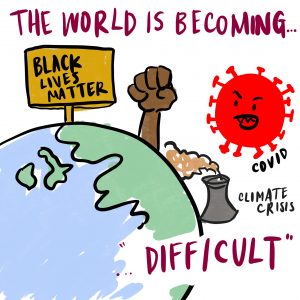 We were meeting 9 months after the pandemic started to feel like a reality and more than 8 months since the first lockdown but it also felt important when Sarah Blowers drew attention to the other major foci of the year – the BLM movement and the climate crisis. We are living in times where radical social change has never felt as critical and where our work is more important than it has ever been before.

A break then followed which included a movement session – there had been an attempt to recreate the experience of moving between rooms and activities as the lunch break was shared food making with Fadia in the Scratch Bar. Such ‘experiences’ were important to the overall day adding new ways of interacting to the zoom platform that we have all grown to both love and hate at the same time!

The workshops led by four of the commissioned projects were repeated in the afternoon allowing delegates to attend two in total throughout the day. They varied in content but three of them included co-creators. One involved a self-massage session and short yoga/ breathing class whilst others presented videos of their projects and approaches. What was evident was that the approach to co-creation was different in all projects and was adapted to suit the context, the group and their wants and needs. All projects had of course been affected by Covid-19 but had dealt with this in different ways with some postponing elements of the project whilst others took activity on line and approached the programme pragmatically.

It is worth speculating on the ‘frame’ within which we present this kind of work – as well as the way we communicate it. If we are seeking to amplify the practice it will be important that we get this right. The videos shown in workshops were wonderful and hearing from the co-creators about what it meant to them was incredibly valuable to all attending. Questioning was respectful, supportive and curious. However, there was less emphasis on what we would learn about things which didn’t work. Do we all fall into the desire to tell a positive story first and reflect later? The way we talk about what happens is important if we are to genuinely improve the practice and learn from each other.

It was interesting to see how many people took part in the optional conversations during the breaks – regional groupings are likely to be crucial to the next iteration of the Network as it is likely that a more federated structure could be the way forward. However, there was also a suggestion from one delegate that thematic conversations and sub groups might also be of interest.

The evaluation session considering the impact of Covid-19 and subsequent shift to digital connection was provocative and rich. There are so many questions around what works and what is less effective when co-creating in a digital realm. We are learning so much and are having to make responsible choices in a new context where digital poverty, accessibility, democratisation and intimacy are being challenged. A paper will be produced and published in the coming months addressing these questions and assimilating the learning that was shared in the breakout groups.

The final provocation and plenary looked at how we are responding to the climate emergency and raised some powerful questions around how co-creation can help us to respond to the multiple crises we are facing.

We were left reflecting on the strong sense of purpose in much of the co-creation work being described and felt that this purpose was being strengthened by the big challenges we face. However, it was also clear that Covid-19 has challenged and disrupted things and that organisations and practitioners have had to think hard about how to make responsible choices in that space. It reinforced the perception that co-creation seems to be a way of addressing questions of social justice, of surfacing issues to do with power and inequality. So, whilst a virtual BAC for the Network meeting may not have quite replaced the value of truly being in the rooms with people, it provided a challenging day of conversations, discussion and learning and it felt genuinely warming to be in conversation with people who were interrogating this important set of practices and approaches.